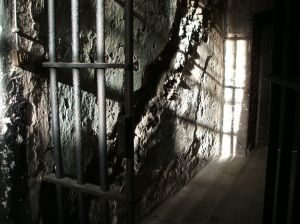 Our White Plains criminal defense lawyers keep current and post relevant events which are related to criminal law. On June 6, 2015 two convicted murders Richard Matt and David Sweat escaped from a maximum security prison in Upstate New York. The pair reportedly planned their escape for years with help from a woman who worked as a teacher at the prison.

Joyce Mitchell has been arrested and charged with aiding the prisoners in their escape. Investigators say Mitchell provided Matt and Sweat with the tools they needed to pull off their escape, and was supposed to drive their getaway car as well. Mitchell was charged with providing hacksaw blades, chisels, and a screw driver to the inmates. She admitted that she agreed to drive the getaway car for the two, but says she backed out at the last minute because she felt bad participating in their escape. Her lawyer has entered a not guilty plea on her behalf.

Mitchell was reportedly having sexual relations with Matt, and had previously been under investigation by the prison for having a sexual relationship with Sweat which caused him to be moved out of her tailoring class so the two of them would be separated. Sources say she was willing to help the prisoners escape as long as they agreed to kill her husband once they were free. Mitchell confirms they devised a plan to runoff together once the inmates escaped and mentions that the two picked a location where they planned to settle down. She has not made any comment on the allegations of hiring Matt and Sweat to kill her husband.

Richard Matt and David Sweat are dangerous criminals. Matt was sentenced to 25 years to life for kid napping and murdering a man in 1997, and Sweat was serving a life sentence for the murder of a Broom County sheriff’s deputy in 2002. The pair reportedly left sticky notes along their escape trial, with snarky messages like, “have a nice day”.

Although police have gathered over 1,000 leads in the case, they are still having trouble locating the escaped inmates. More than 800 searchers have been coming through a 13 mile radius around the prison and their search has not been successful. When the prisoners first broke out there were promising clues; however now some say the search for these two convicted murders has gone cold. New York Governor Cuomo says the prisoners could be almost anywhere at this point. Investigators are not sure if there was anyone besides Mitchell involved in their escape plan.

The involvement of a prison worker proves that there must be more a more rigorous hiring and training process for prison employees. We must be sure people working in our state prisons are not aiding inmates in their escape plans, and putting our citizen’s safety in jeopardy.

Often when prison reform is mentioned there is a focus on the school to prison pipeline, and the mass incarceration of minority populations. While these two topics are important, it is also important to monitor the people who work within our prison system. We must take extra precaution when hiring prison workers, insuring they are qualified to aid in our inmate’s rehabilitation process.

School districts in the area have suspended all outdoor activities and arranged for state police to patrol school campuses from 7:00 am – 5:00 pm. Officials are advising people who live in the area of the prison to be on the lookout for these dangerous, possibly armed escaped prisoners.