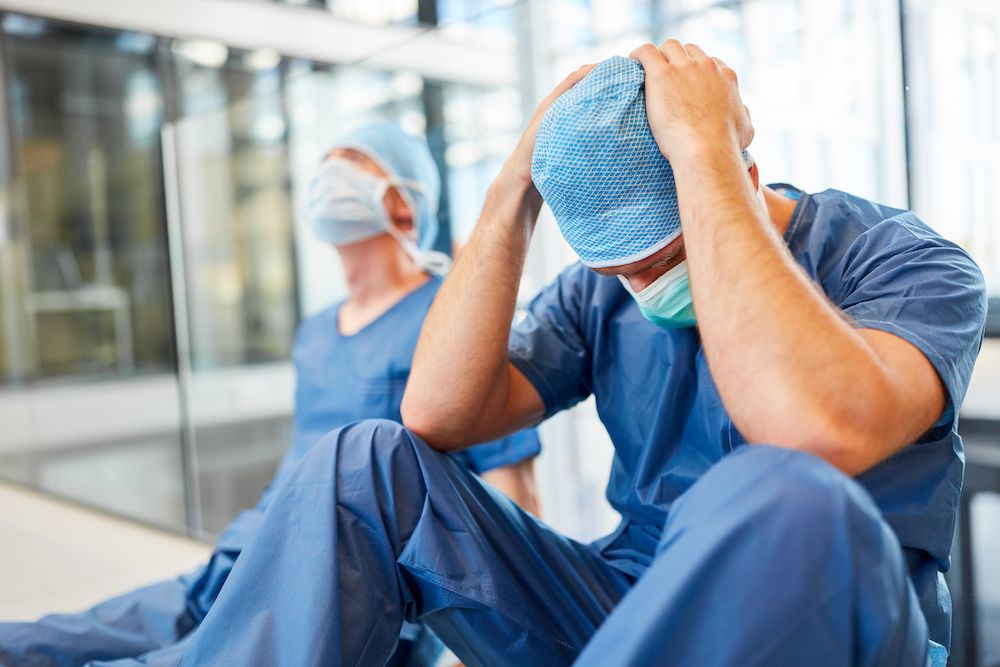 WHAT IS MEDICAL MALPRACTICE

Medical Malpractice is more than a mistake, its a breach of a patient’s trust by their doctor. When a person goes to a physician or hospital, they are trusting that their health care provider will use their best skill and judgment to take care of the patients. Our New York medical malpractice lawyers know that unfortunately that is not always the case. Understaffed hospitals and doctors who are seeing too many patients at once and are running their medical practices like a factory, often committing medical errors. Our New York City and Westchester medical malpractice attorneys for decades have fought to hold physicians, hospitals, doctor’s offices and health care providers accountable for their medical errors. Medical errors and medical negligence are unfortunately a leading cause of complications and even death.

HOW LONG DO I HAVE TO FILE A MEDICAL MALPRACTICE LAWSUIT

From our Midtown Manhattan office, our New York City malpractice attorneys have handled cases in New York City, including cases against doctors, hospitals and medical offices in the Bronx, Manhattan, Queens and Brooklyn.  New York City, especially Manhattan has physicians who claim to be the best of the best, but our New York City medical malpractice attorneys know that this isn’t always the case. Often the hospitals and facilities that claim they are too big to fail, miss small and obvious signs and allow test results and patients to slip through the cracks. Our experienced medical negligence lawyers have the skill and experience to identify when something wasn’t done right or in a timely manner. We work closely with experts in the relevant fields to identify departures from accepted standards of medical care. Doctors are experts at burying the facts that show they were at fault and our Manhattan medical negligence attorneys know how to look behind the veil of medical secrecy to get to the truth.  These days hospitals are run in a compartmentalized manner, in which, specialists are outside contractors and not direct employees of the hospital. This often results in a complete lack of continuity of care, where no one is in overall charge of a patient’s care and important developments are overlooked, which results in the patient slipping through the cracks.

For a free consultation with our New York City medical malpractice lawyers in our Manhattan office, call us at 212-858- 0503.

Our New York City medical malpractice attorneys know that cases involving New York City Health and Hospital Corporation, have shortened timelines to file a lawsuit and notice of claim requirements that have the effect of preventing patients with meritorious claims from suing and holding those responsible for their conditions accountable.  These requirements, which are beyond what is required for cases against private doctors, hospitals and medical offices, can be a trap for the unwary and work injustice.

Our attorneys have experience litigating against some of the most prominent Westchester firms and have handled several cases involving both private doctors and hospitals in Westchester, including White Plains Hospital and the Westchester Medical Center.  If you suffered an injury as a result of medical malpractice from the Westchester Medical Center, a notice of claim must be filed within 90 days of the malpractice and a law suit must be filed within a year and ninety days of the occurrence.

Autoimmune suppressants are prescribed to treat a number of autoimmune disorders, rheumatology disorders and to prevent the immune system from attacking transplants. Since it is known that autoimmune suppressants and high does steroids reduce the immune system and create a risk of latent infections, such as tuberculosis becoming active, the doctor that is prescribing autoimmune suppressants or high dose steroids must take steps to screen for the presence of a latent infection. The Center for Disease Control publishes data which indicate if patients are at a high risk for having been exposed to tuberculosis and a few examples include immigrants from countries where tuberculosis is endemic, public school teachers, people who have been incarcerated, those who work in the prison or criminal court system and health care workers.

Simple tests can determine if someone has been exposed to tuberculosis, including  gamma assays and a gold quantiferon test. If a screening test is positive, auto immune suppressants can be prescribed, as long as the patient is simultaneously being treated by an infectious disease physician who can prescribe medication, which will prevent the latent tuberculosis infection from becoming an active infection.  These prophylactic medications are up to 90 percent effective in preventing latent tuberculosis infections from becoming active.

If you were a high risk patient and were not screed for a latent tuberculosis infection, prior to being prescribed high dose steroids or autoimmune suppressants, you likely have a medical malpractice case, if you developed active tuberculosis or tuberculosis meningitis. Also, if you were screened and had a positive result, which was not communicated to you or addressed with an infectious disease referral and prophylactic  treatment, you may also have a medical malpractice case.

In general, one of the most important principles in treating fractured is “reduction”, which refers to reducing a deformity including nonalignment, deviation or displacement.  If a fracture is significantly displaced, in general, a surgical reduction and fixation may be required to allow the fracture to heal in an acceptable position. Where a doctor fails to make a surgical recommendation, and there is displacement and malunion that can be malpractice. Another common problem is the failure to properly treat a known fracture. In general, a fracture which is stable and in good anatomic alignment, needs to be properly immobilized, to give it time to heal. When the initial x-ray shows a fracture in good position and the doctor fails to cast or otherwise properly immobilize a fracture for a sufficient time to allow the fracture to heal, that may be malpractice, if the fracture subsequently displaces.  Another common area of malpractice our medical negligence attorneys see is the failure to take a follow up x-ray, two to three weeks after the injury, especially with hand and wrist fractures, which displace and malunite. If you have a hand or wrist fracture which malunited, because the fracture was not surgically treated or properly reduced or properly immobilized or monitored, you may have a medical malpractice case.

Another problem with hand injuries is that some of the carpal bones such as the lunate or scaphoid have tenuous blood supply. This makes it crucial that the that the fracture is properly immobilized and activity is restricted so the bone can heal. In carpal bone fractures, where the bone does not heal, the fracture prevents the blood from getting from one side of the bone to the other and the bone, latterly develops necrosis and dies, as a result of the lack of oxygen. This condition is called Kienbock’s disease will require a surgery to correct to revacscularize, or get the blood supply back to the bone.

Our medical malpractice attorneys know that early detection of cancer dramatically increases the likelihood of survival.  Where cancer is detected early, patients have the best chance of survival. Too often, doctors are dismissive of a patient’s complaints and fail to do a proper work up.   Where a doctor fails to recommend normal screenings for known types of cancers, such as pap smears, colonoscopies or breast exams, especially where there is a family history of cancer, that can lead to an undetected tumor progressing.

Also where patients complain of pain, and basic physical examinations do not reveal the source of the pain, further investigation and work ups, such as blood tests, CT scans and MRI imaging may be required. The failure to take a patient’s complaints of pain, especially where the pain is progressing, can allow cancer to spread from a single organ, where the tumor is confined to a single organ, which is often called stage I, to become metastatic, and enter the blood stream and spread to other organs.  Doctors who fail to investigate their patients complaints allow cancer to progress and are responsible for the loss of the window of opportunity to treat the cancer. Early detection dramatically increases a patient’s survival rate and the loss of that opportunity can be fatal and devastating to a patient who trusted their doctor to do the right thing for them.

The birth of your child is supposed to be a memorable event in your life. Unfortunately, when the doctor does react to rapidly developing events, the infant and family can pay the price. There are a number of known and foreseeable complications which can arise during delivery which can affect the child’s well being for the rest of his life.

One common scenario is where due to the labor process, the infant is deprived of oxygen, often because the umbilical cord is pinched or around the infant’s neck. The OB/Gyn is supposed to actively monitor the infant’s hear rate, to make sure that the baby is not being deprived of oxygen. If the physician notices irregularities in the fetal heart rate, they are supposed to do an immediate emergency C-section. A C-section can take a matter of minutes, which minimizes the amount of time that an infant is deprived of oxygen. If the doctor ignores irregularities in the fetal heart beat and decides to proceed with a vaginal delivery, which can take hours, they are unnecessarily increasing the risk of brain injury to the infant. The brain damage that can be caused to an infant from lack of oxygen can be catastrophic and the most unfortunate part is that the brain damage could have been avoided by emergency C-Section. A brain damaged infant can require medical care for the remainder of  his or her life, and our New York medical malpractice attorneys can seek damages to cover the infant’s medical costs projected through the course of their life, among other costs.

Another situation where babies suffer unnecessary brain trauma as a result of medical negligence, involves large babies and women with narrow birth canals. If the babies  head is squeezed or pushed through a birth canal that it too small for his head, the maternal forces can cause brain injury. This brain injury could also have been avoided by a C-Section, which avoids pushing the baby through the birth canal, all together.

The range of severity of a brachial plexus injury can vary depending on the extent of the injury to the brachial plexus. Injuries can result in weakness and restricted motion, in the case of a stretching and of the brachial plexus or the baby’s arm or on the other extreme, the baby’s hand can grow at a decreased rate and remain undersigned throughout the course of its life, if several levels of tearing occurs.

If your doctor tells you that your child has a brachial plexus injury, that just occurred during the birthing process, they may not be telling you the whole truth. One of the classic signs to look for a traction injury is facial bruising or bruising along the crown, as well as bruising on the shoulder. If there is facial bruising on your baby, that was probably caused by the physician pulling on the baby’s head while the child was in shoulder dystocia. If is important to document this compelling evidence, so if you even suspect a birth trauma injury was caused by medical malpractice, take pictures and document the baby’s condition.