IS THE DOB DOING ENOUGH TO PREVENT CONSTRUCTION ACCIDENTS IN NYC By Michael Joseph on October 19, 2022 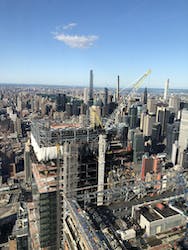 Among the findings of the study, were that the Department of Buildings failed to provide adequate monitoring of construction sites provided inadequate oversight by failing to ensure that contractors and building owners followed the New York City Building Code’s safety requirements. The State Auditors visited 43 constructions sites in throughout New York City, including Manhattan, the Bronx, Queens, Brooklyn and Staten Island and found 77 safety issues at 16 sites, including no site safety manager, missing or incomplete safety logs and inspection records, and no proof that workers were given required safety training. These safety inspections do not even include checking whether the construction sites were compliant with the New York Industrial Code, which has specific safety regulations concerning the means and methods of construction, as well as safety equipment requirements.

In the last four years, the N,Y,C Building Department issued 31,701 construction related summonses and 77%  percent of these went more than 170 days without being remedied and more than ten percent went without being closed for a year and a half. A few examples of some of the more tragic preventable fatal accidents and those with serious personal injuries are as follows

On September 18, 2020, a construction worker died in Manhattan after falling 62 feet through an opening where guardrails were missing. This death occurred despite Labor Law 240's strict requirement that workers who are working over unprotected heights must have fall protection. Our NYC construction accident lawyers know that what makes this death a real tragedy is that the contractors were previosly warned to fix this condition and were issued a violation for missing guardrails 25 days before this construction fatality and the site had more than a dozen injuries.  On Dec. 20, 2019, another construction worker fell 18 feet at the same construction site and passed away from these injuries. This worker would still be alive if he was provided with a life line and harness, which New York's law requires.  Our New York construction accident lawyers who handle both construction site injury cases and construction site fatality cases know that these types of accidents only occur when general contractors cut corners on safety.

In another tragic accident that occurred on December 11, 2018, a worker was killed when he was caught between the ceiling and a scissor lift and even though minor injuries are almost never reported, in this case the Building Department was not aware of the fatality for three and a half years, until they learned of it from the New York City Police Department.

Another tragic construction fatality occurred on  May 19, 2021, in an accident which resulted in one fatality and another worker suffering serious injuries, when their elevator fell five floors. Obviously elevators are supposed to be adequately supported and have an adequate counter-weight and pully system so that they do not just fall. In fact most elevators have brakes that engage whenever there is any type of uninterrupted fall. So this is another tragedy that should not have occurred.

On May 27, 2021, a Brooklyn construction worker suffered a tragic fall, while jackhammering a roof section on a Brooklyn building, and the section which the worker was standing on gave way and he fell 60 feet, and shortly thereafter died from his injuries.  The New York Industrial Code has requirements that prevent demolition unless the structure is adequately supported and braced, which means this is another accident which should not have occurred.

On March 17, 2022, two construction workers were killed at a Manhattan jobsite at 729 Seventh Avenue, when the floor that they were standing on collapsed underneath them, which caused them to plummet to their deaths.  The floor collaped due to demolition activites, despite clear regulations in the New York Industrial Code which require that structural surfaces that are in use be supported during ongoing demolition operations, so that floors are structurally stable.  A major contributing factor to this accident was the fact that there was no demolition supervisor overseeing the demolition, which was allowed to proceed in an unorganized, haphazard and dangerous manner.

On September 12, 2022, another senseless construction fatality occurred at the Brooklyn Lendlease site where an excavator arm, which weighed about 2,000 pounds fell and killed a construction worker. The investigation revealed that the lifting mechanism failed which caused the accident.

On September 22, 2022, there was a near miss, where a 22 year old Bronx woman escaped a near fatal accident, when a crane from a boom truck crashed into her car nearly missing you. Our New York City construction lawyers know that cranes don't just crash unless they are impropery assembled and balanced.  The woman was trapped inside of her vehicle and the crash came within inches of her head.

These high rates of construction accident fatalities has caused local leaders and union officials to call for higher fines for construction safety violations and a law has passed the New York legistlature and was fowarded to the Governor's office.

On November 2, 2022, a tweny seven year old construction worker was the latest victim of unsafe work practices, and died after falling from an elevated work site, where he was installing a beam at a Brooklyn worksite on Fulton Avenue. This worker was non-union, and this latest tragedy underscores the need for better enforcement of safety regulations, especially for workers who do not have unions to protect them if they refuse to do things that are unsafe.

On November 28, 2022, a 36 year old construction worker suffered a fatality after falling from an Upper West Side apartment building on 72nd street. Our NYC construction accident lawyers know that if this worker had fall protection, this tragedy would not have happened.

This year, Brooklyn prosecutors criminally charged a construction company and its employees for reckless endangerment, a misdemeanors for the death of a pedestrian who was walking outside of a construction site, when he was struck by scaffolding that fell 12 stories. The scaffolding on a roof was left unfastened for several days and the wind caught the netting and lifted the scaffold assembly off the roof, after which it fell twelve stories and struck a patron entering a restaurant in the building.