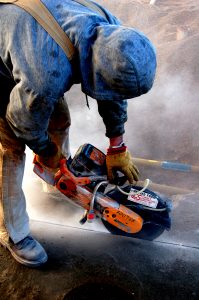 As a New York construction accident lawyer, I have handled numerous cases involving personal injuries with saws. Saws are by their very nature dangerous and when accidents happen serious personal injuries are too often the result.

Often on construction sites, the gaurds on circular saws are removed so that the workers can work faster. Other times, the gaurd does not retract properly after a cut is made and the teeth come in contact with the operator. There are numberous causes of safetys on saws that do not retract. They include worn out or broken springs or build up of saw dust or other material in the saw which prevents the guard from retracting. At the end of every day, the saw should be cleaned by blowing air from an air gun through the saw to prevent the build up of dust.

Likewise, marine construction workers such as dockbuilders are especially at risk for saw accidents because they often work on platforms direclty on the water. The New York regulations require safe and non-slippery footing and coating for work surfaces. When martine construction workers use saws on a slippery surface, the dangers are compounded.